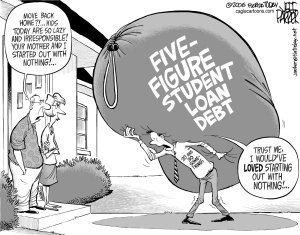 Law school debt has been rising for some time.   Students graduating from American Law Schools with ever increasing debt loads, do not seem to match the earning ratio that would make law school debt a wise investment.  Over at Balkinization, Brian Tamanaha reports:

What’s remarkable is that the majority of graduates from these law schools–with the exception of Northwestern–do not obtain jobs with salaries sufficient to make the monthly loan payments due on the average debt. At some of these schools 90% or more of graduates with debt do not earn enough to make the loan payments on this level of debt (not all indebted students will carry the average debt).

I admit as a Professor in a fourth tier school in California, I worry very much about the debt our students incur.    I began thinking about this problem when the occupy Wall Street protests began.  One of the unifying cries of the occupy Wall Street movement was a very sincere question — why give Wall Street bail outs instead of students.  At the time I thought that while this felt like a  just solution, if carried out, it would merely  place a bandaid over a problem that needed greater attention.   My perception at the time, and still, is we needed to approach the problem in both a macro and micro way — both institutionally and systematically.    We should not consider law school debt as a unique problem in American education — student debt is rising across all educational sectors.   This is not merely a problem of debt  to income ratio — though that is certainly one piece of the puzzle.

But we should not absolve institutions from responsibility either.  The responsibility of the law school to think critically about how it can put its graduates in the best position to obtain meaningful legal employment (besides passing the bar exam) seem integral to the evolving nature of the law school.  Different schools have taken unique approaches.  For example Northeastern has long used a quarter system so that the bulk of its students would be free to take on extern opportunities during normal academic year (instead of the summer when they find themselves competing with top 15 law schools for the same opportunities).  I think this strategy has been successful for Northeastern’s graduates.

Indiana University – Bloomington incorporated career services strategizing as a part of its PR class — forcing students to think about professional responsibility as a development program rather than a requirement for admission to the bar.  It seems that Fourth Tier schools in complex markets need to be similarly creative in thinking about how to maximize opportunities for students.  (This is not to say that the Career services people in various institutions do not work very hard for their students — but institutionally, career services receives, I believe, less attention than it deserves.

One solution might be to require  schools (at all levels) that accept Federal Student Aid to accept 50% of the student loan burden for students that are either not employed or enrolled in a graduate program eighteen months after graduation and until that student is employed and or in graduate school.   This would do a couple of things — first it would force schools to be more selective in the persons that they admit to their programs.   But the down side to this solution is that schools would then become risk adverse in the admissions process – -they would only admit the students that they are certain would be successful in both the job and the bar market.  This might be a harder point to gauge, than say bar success; but as risk averse as institutions tend to be, some metric would become a defining point for determining who is likely to be a “good risk” and who is likely to be a “bad risk.” It perhaps might also increase first year attrition rates, with law schools and other programs increasing class sizes to offset financial losses from lower class sizes in the second and third year.  Perhaps the burden to schools could be reduced by schools demonstrating that they (1) took active measures to enhance the marketability of its graduates at graduation; and (2) continue offering on-going support to graduates in their pursuit of employment opportunities.

Another additional solution would be for the ABA to require long-range reporting of student debt to income burdens of graduates.  Perhaps Jim Chen’s ratio of one-third tuition to first year salary is a starting point.  But then again, I am not sure that average debt ratios at graduation tell us a whole lot about the debt problem.   What we really want to know is what the debt to income ratio is during specific windows of time — one year, three years, and five years after graduation. We might be willing to live with higher debt if there is evidence suggesting a higher return.  That would also allow financial institutions to frame repayment plans in a manner that works for graduates.   Reporting this data and making it publicly available (through U.S. News) would create market pressure on schools.   Additionally, forcing schools to report debt information for all admitted students would again force schools to carefully monitor its admissions offices. Of course, this might also have the same impact as above — perhaps forcing schools to be more careful about its admission decisions, reducing the number of opportunity admits a school makes, or increasing law school attrition after the first year.

I think the most important point here is a broader conversation of all of the potential problems and risk outcomes we are not comfortable with.  While the law school (and educational bubble) points to weaknesses of American education, to craft a solution based only on the bubble would be as foolhardy as ignoring the problems that the bubble creates.

What are your thoughts?