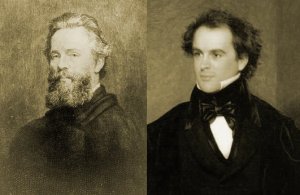 Yale University Libraries is posting letters between various authors, including a letter between Melville and Hawthorne.  This is an interesting project.  I am not sure if its the quaint interlude, but I find the reading of these letters interesting.  I will try to post them periodically.

Hawthorne and Melville met in 1850, and maintained a correspondence until 1852.  From the life and writings of Herman Melville posted at Melville.org:

The two authors met for the first time in Stockbridge on August 5, 1850, on a picnic excursion hosted by David Dudley Field. Hawthorne was forty-six and was familiar with at least a portion of Melville’s work, having favorably reviewed Typee in the Salem Advertiser (March 25, 1846); Melville was thirty-one and had just written or was about to write an exceedingly warm and enthusiastic piece on Hawthorne’s Mosses From an Old Manse, a copy of which had been given to him by an aunt a few weeks before.

Early in the course of the excursion, a sudden thunderstorm forced the party to take shelter, giving Melville and Hawthorne an opportunity to become better acquainted. The two men took to each other at once, and as their conversation continued were delighted to discover a growing bond of mutual sympathy and comprehension. Two days later Hawthorne wrote to a friend “I liked Melville so much that I have asked him to spend a few days with me.” This would be the first of a series of visits, supplemented by written correspondence, that would continue until the gradual cooling off of the friendship late in 1852.

On their last meeting, Hawthorne records:

“Herman Melville came to see me at the Consulate, looking much as he used to do (a little paler, and perhaps a little sadder), in a rough outside coat, and with his characteristic gravity and reserve of manner…. [W]e soon found ourselves on pretty much our former terms of sociability and confidence. Melville has not been well, of late; … and no doubt has suffered from too constant literary occupation, pursued without much success, latterly; and his writings, for a long while past, have indicated a morbid state of mind…. Melville, as he always does, began to reason of Providence and futurity, and of everything that lies beyond human ken, and informed me that he had “pretty much made up his mind to be annihilated”; but still he does not seem to rest in that anticipation; and, I think, will never rest until he gets hold of a definite belief. It is strange how he persists — and has persisted ever since I knew him, and probably long before — in wondering to-and-fro over these deserts, as dismal and monotonous as the sand hills amid which we were sitting. He can neither believe, nor be comfortable in his unbelief; and he is too honest and courageous not to try to do one or the other. If he were a religious man, he would be one of the most truly religious and reverential; he has a very high and noble nature, and better worth immortality than most of us.”

My Dear Hawthorne:—This name of “Hawthorne” seems to be ubiquitous. I have been on
something of a tour lately, and it has saluted me vocally & typographically in all sorts of places
& in all sorts of ways. I was at the solitary Crusoeish island of Naushon (one of the Elisabeth
group) and there, on a stately piazza, I saw it gilded on the back of a very new book, and in the
hands of a clergyman.—I went to visit a gentleman in Brooklyne, and as we were sitting at our
wine, in came the lady of the house, holding a beaming volume in her hand, from the city—“My
Dear,” to her husband, “I have brought you Hawthorne’s new book.” I entered the cars at Boston
for this place. In came a lively boy “Hawthorne’s new book!”—In good time I arrived home.
Said my ladywife “there is Mr Hawthorne’s new book, come by mail” And this morning, lo! on
my table a little note, subscribed Hawthorne again.—Well, the Hawthorne is a sweet flower;
may it flourish in every hedge.
I am sorry, but I can not at present come to see you at Concord as you propose.—I am but just
returned from a two weeks’ absence; and for the last three months & more I have been an utter
idler and a savage—out of doors all the time. So, the hour has come for me to sit down again.
Do send me a specimen of your sand-hill, and a sunbeam from the countenance of Mrs.
Hawthorne, and a vine from the curly arbor of Master Julian.
As I am only just home, I have not yet got far into the book but enough to see that you have most
admirably employed materials which are richer than I had fancied them. Especially at this day,
the volume is welcome, as an antidote to the mooniness of some dreamers—who are merely
dreamers—Yet who the deviant a dreamer?
H Melville
My remembrances to Miss Una & Master Julian—& the “compliments” & perfumes of the
season to the “Rose-bud.”