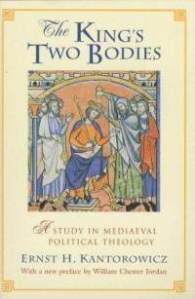 Today I wrap up teaching one of my favorite subjects in Property (ok I like them all) — Adverse Possession.  One of the topics we cover is adverse possession claims against the state.   Traditionally, Adverse Possession claims against the state did not stand.  This tradition in the common law stretches to the concept of the King’s duality, the King as Corporation as F.W. Maitland would refer to it, or simply The King’s Two Bodies as eloquently stated by Ernst Kantorowicz.   As Justices Southcoate and Harper in the case Willion v. Berkley said (as reported in Blackstone):

The king has two capacities, for he has two bodies, the one whereof is a Body natural, consisting of natural members as every other man has, and in this he is subject to Passions and Death as other Men are; the other is a body politic , and the members thereof are his subjects, and he and his subjects together compose the corporation as Southcoate said, and he is incorporated with them, and they with him, and he is the head and they are the members, and he has the sole government of them; and this body is not subject to Passions as the other is, nor to death, for as to this Body, the King never dies, and his natural death is not called in our law, the Death of the King, but the demise of the King, not signifying by the word demise that the body politic of the King is dead, but that there is a separation of the two bodies, and that the Body politic is transferred and conveyed over from the Body Natural now dead, or now removed from Dignity royal, to another Body natural.   So that is signifies a removal of the Body politic of the King of this realm from one Body natural to another.

But perhaps the most famous iteration of the King’s two bodies comes from a case involving Edward VI’s lease of certain lands in the Duchy of Lancaster.   The land in question was considered to be the private lands of the Lancastrian Kings, not the property of the crown.  So when the lease that Edward the VI executed during his Regal term was called into question during the reign of Elizabeth I, the Crown lawyers all agreed upon the following:

that by the common law, no act which the King does as King, shall be defeated by his Nonage. For the King has in him two bodies, viz a Body natural and a Body Politic. His Body natural (if it be considered in itself) is a body mortal, subject to all Infirmities that come by nature or Accident to the Imbecility of Infancy or old Age, and to the like Defects that happen to the natural Bodies of other people.  But his Body Politic is a body that cannot be seen or handled, consisting of Policy and Government, and constitutes for the Direction of the People and the Management of the public weal. And this body is utterly void of infancy, and old age, and other natural Defects and imbecilities, which the Body Natural is subject to, and for this Cause what the King does in his Body Politic cannot be invalidated or frustrated by any disability in his natural body.

This notion of the King’s two bodies is not merely an aberration of the law — rather it was a well known complication of living with a king.  As a matter of fact, the notion of the king’s two bodies figures quite prominently in Shakespeare’s Richard II and are referenced in others. For example in Henry V, King Henry V says:

Twin-born with greatness subject to the breath, Of every fool, whose sense no more can feel But his own wringing.  What infinite heart’s ease Must kings neglect that private men enjoy! What kind of god are thou, that suffer’st  more of Mortal griefs than do they worshippers?

In Richard II, the King’s dilemma is the mortality of the body against the feuding and disquiet of his subjects.   And after seeing a long procession of “tortured kings” Richard proclaims:

For God’s sake let us sit upon the ground, And tell sad stories of the death of Kings – How some have been deposed, some slain in war, Some haunted by ghosts they have deposed, some poisoned by their wives, some sleeping killed; All murdered! for within the hollow crown that rounds the mortal temples of a king, Keeps death his Court, and there the antic sits scoffing his state and grinning at his pomp, Allowing him a breath, a little scene, to monarchize, be feared, and kill with looks, Infusing him with self and vain conceit, As if the flesh which walls our life, Were brass impregnable; and humored thus, Comes at last , and with a little pin Bores through his castle wall, and farewell King!

As noted before, this fictionalized view of the King (the persona gemini) had far reaching impacts, including the law of adverse possession.  The next post will consider the King’s two bodies impact on Adverse Possession more directly.