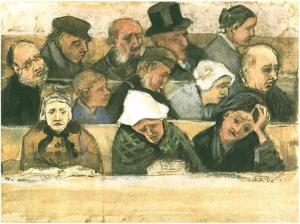 So I have been doing some work on the meaning of place in defining the sacred and have considered how people claim space in religious venues. [You can take my survey here].  One of the more interesting entanglements of English legal history is how church pews became treated as a servitude to one’s real property.  Of course, England was not alone in this regard.  As Kelly Olds writes in her article Privatizing the Church: Disestablishment in Connecticut and Massachusetts, prior to disestablishment in America, pews were taxed.  Afterwards, they were auctioned in order to raise money for the church’s work.  It seems that entitlement to space in church has long been a problem.

But the English had a particularly… well… property way of resolving the problem.  I discovered an english treatise on… yes… property law surrounding church pews.  The work: Church Pews, Their Origin and Legal Incidents with Some Observations on the Propriety of Abolishing them in Three Chapters, by the esteemed lawyer John Coke Fowler (See notes below for information on Fowler). From the treatise:

“We have also heard that the parishioners of divers places do oftentimes wrangle about their seats in church, two or more claiming the same seat; whence arises great scandal to the Church, and the divine offices are sore let and hindered: wherefore we decree that none shall henceforth call any seat in the church his own, save noblemen and patrons; but he who shall first enter, shall take his place where he will.”

So what, do you say is the best way to establish your entitlement to a particular pew?  Property, of course.  Again from the 1846 treatise:

Again, as an example of the practice amongst private individuals of obtaining grants of separate and distinct seats for themselves and their families before the fashion became general, I will adduce a faculty, dated in 1579, for the erection of a pew in the church of Chesterton, in the county of Cambridge, part of which I quote from the same source. It is granted by [14/15] an officer of the Bishop of Ely, and sets forth that the churchwardens and another parishioner of Chesterton appeared on a certain day before him, and stated in writing that “Thomas Lorkine, or Larkin, gentleman, Doctor in Medicine, and Regius Professor in the University of Cambridge, had held for five or six years past freehold property in the aforesaid parish, equal in extent to that of any other parishioner: and that up to that time no seat, or place, or stall, had been granted to the said Thomas Larkyn, suitable to his rank, estimation, and property in the aforesaid parish-church. Which premises considered, they judged it most convenient that the said Thomas Larkyn, his wife and heirs, should for ever sit apart and by themselves in a place on the north side of the church nearest the chancel, on the left hand of the chancel-door, next to the chapel where John Balfude, gentleman, hathbeen wont to sit during the time of divine service; from east to west the space to be assigned to him containing eleven feet, from north to south seven”

A pew still stands in Barking Church, Suffolk, bearing date 1601; another in St. Mary, Geddington, in the county of Northampton, dated 1602, and the building of pews went on increasing as we approach the civil war. The Cambridge critic quotes the following entry of [15/16] 1611 from the St. Margaret’s accounts. “Item: paid to Goodwyfe Wells for salt to destroy the fleas in the churchwardens pew 6d.;” which not only shows, as he justly remarks, that pews were even then baized, but also proves that they were not an entire novelty at that time.

Lastly, to show the period at which pews came into general use, I refer to a letter of Dr. Corbett, Bishop of Norwich,written to his clergy in 1622, in which he says, “Stately pews are now become tabernacles with rings and curtains to them. There wants nothing but beds to hear the word of God on: we have casements, locks, and keys, and cushions, and for those we love the church. I will not guess what is done within them: who sits, stands, or lies asleep at prayers, communion, &c.; but this I dare say, they are either to hide some vice, or to proclaim one; to hide disorder, or to proclaim pride.” So in the orders and directions of Bishop Wren, issued in the Diocese of Norwich in 1636, it is directed “that no pews be made over high, so that they which be in them cannot be seen how they behave themselves, or the prospect of the church or chancel be hindered; and therefore that all pews which do much exceed a yard in height, be taken down near to that scantling.” [See note to Archdeacon Hare’s primary Charge, p.50.] [16/17]

In general, the entitlement to seating in a church in English Common Law was perceived to be a common right of the parishioners.  That is, the community held the same equal right of access to sit wherever they like.  But some instances warranted greater certainty of seats for some over others.   So how does one enforce such expectations (you know, without being so tacky as having the pastor withhold holy communion from someone that won’t agree) — property. And particularly, either creating a servitude or a prescriptive claim.   Again, from the treatise:

A faculty, which in these cases either actually exists, or is supposed by the law to have existed, is the instrument by which some privilege is granted to a man by the favour and indulgence of ecclesiastical authority, and in the case of church seats is, generally, a license granted by the ordinary, or some officer to whom the bishop delegates his authority in such matters, to a certain person and his heirs, being owners and inhabitants of a certain dwelling-house, for him, and them, and their families, to sit, stand, and kneel, in a certain pew, in the church of the parish in which the house is situated, during divine service, exclusive of all other persons whatsoever. The form of the instrument may vary, but in substance it ought [27/28] always to annex a certain pew (whether already built, or about to be built, by virtue of the same faculty,) to a particular dwellinghouse; as the annexation of a pew to the person of the grantee, (or party to whom the faculty is granted,) though it has not unfrequently been attempted, is, in fact, invalid in law. These instruments are at present not often applied for, or granted; but when a faculty for appropriating a pew is required from the ordinary, notice must first be given in the church, calling upon the incumbent, churchwardens, and parishioners, to show cause why it should not be granted; and if no good cause is shown, in due time the faculty is issued….

Thus it has been said by an eminent judge, Lord Tenterden, that “in no case has a person the right to the possession of a pew, analogous to the right he has to his house or land, for trespass would lie for injury to the latter, but for intrusion into the former the remedy is by action on the case. That furnishes strong reason for thinking that the action is maintainable only on the ground of the pew being annexed to the house as an easement, because an action on the case is the proper form of remedy for disturbance of the enjoyment of any easement annexed to land, as for instance, a right of way,” &c. [Mainwaring v. Giles, 5 B. & Ald. 362. And again in the same case, Mr. Justice Holroyd [36/37] remarked, that “the mere right to sit in a pew is not such a temporal right, as that in respect of it an action at common law is maintainable. Where a right is annexed to a house in the parish, an obstruction to that right is a detriment to the occupation of the house, and I apprehend it is only on account of the pew being annexed to the house that the temporal courts can take cognizance of an intrusion into it.”

Like one’s driveway that borders another’s property, one’s pew could be treated as a right attached to one’s home.   Who knew?  Similarly, simply being there longer could also establish a claim to the pew:

A title by prescription is a title to property corporeal or incorporeal, (that is, to the realty or land, or to mere rights, as distinguished from the ownership of land, exercisable over, or by means of, the land of another, such as a right of way, or of common,) acquired by unobstructed usage and the lapse of time, and which, in the absence of any circumstances tending to repel the usual inference, the law supposes to have had a valid commencement. [Prescription is a term derived from the Roman law, and is nearly the same as usucapio. There were different periods recognized as making the title by usage respectively inchoate and complete; “longi vel longissimi temporis praescriptio;” which is accurately illustrated by the provisions of the Prescription Act, 2 & 3 Wm. IV. c. 71.] ….And thus when [30/31] long enjoyment, and the tacit acquiescence of all other interested parties, are proved, then, whatever the nature of the conveyance, grant, or transfer, which is necessary to pass the thing in question directly, may be, the law presumes that it once existed, and was, in fact, the commencement of the title in dispute.

In general, long length of tenure, plus exerting money for the repairs and maintenance of a pew (as long as one owned property in the parish — very important) created an entitlement to the pew.   And as a most curious exception, one need not prove repairs with regards to aisle seats.  [Did they not appreciate the kind of high end real estate exists at the aisles?  Apparently not…]

There is one other case, in which, in setting forth a prescriptive title to a pew, it is not necessary to allege reparation. It is where a person prescribes for a seat in an aisle. Here, even in a dispute with the ordinary, it is not essential to allege in the declaration that the claimant has done any repairs. For, in the first place, the law regards aisles, chapels, and lesser chancels as minor parts, or adjuncts only of churches, and as differing in origin and legal properties from the nave or body; and in the next place, it considers that the title may be derived from the circumstance of the claimant [45/46] or his predecessors having been the founders of or contributors to the building of the aisle; and hence it liberally presumes that the claimant does repair, without requiring from him an allegation of that fact ‘

So, the interesting issue that I think this piece raises is the question of legal entitlements used to alter social expectations or to enforce social expectations.    Have you ever sat in someone else’s preferred seating at church?   If so, I’d love to hear about your experience.  Please post comments below. In my next post, I will describe how we protect sacred space — both legally and non legally.

A couple of notes:

I am not sure who John Coke Fowler was, but his son was William Ward Fowler —  memoir available here.    Also, googling his name, he wrote wrote on many aspects of the law, including the entanglement of William the Conqueror and the Feudal System, and on coal law in his work Collieries and Colliers. He also wrote other works on the disestablishment including: Disestablishment: A Church Catechism.   Incidentally, if you like your treatises in hard copy, you may also purchase Church Pews, Their Origins and legal Incidents, here, through Amazon here.]